Most pool ladders tend to get rust as they are made of metal. Although the manufacturers claim them to be rustproof, the harsh environment because of the pool chemicals washes off the anti-rust coating and paint, leaving the ladder to rust over time.

If rust remains unnoticed, it can cause significant problems to your pool ladder, like increasing its weight, damaging your pool’s surface, and even weakening the ladder’s structure which may cause mishaps.

Rust is corrosion that can spread with time, causing a lot of damage to your equipment. Having a rusty ladder has never been good news for people who own swimming pools. Removing rust from pool ladders is not easy, but it just takes some simple steps to get rid of the rusting process.

To remove rust and clean the ladder, the first step is to remove the steps from the pool; if it is a portable ladder, that will be an easy step; if not, you have to use wrenches and tools to get it out. If you need help, we have a guide on removing a pool ladder. After removing the ladder, wipe it and make it dry. Then use Any of the following Techniques to get rid of the rust

Rust is a severe problem in the pool. It will make your pool ugly. To get rid of rust from your pool ladder, you need to take a few steps below:

After you get rid of the rust and clean the ladder, it is time to install the ladder back into its place.

Rubbing a wire brush into the rusted metal will remove the rust. To ensure that all rust is removed, the process must be done in a well-ventilated area and in a safe way for someone working on their hands and knees. The brushes should be rubbed on both layers of rust after the rust has been removed wash off the surface.

Many rust removal techniques can be used on the ladder, but the most common one is using a solution of vinegar and salt. This technique is relatively easy to do and does not require any specialized knowledge or experience.

Rust is a natural process that can happen to any metal or object exposed to water.

The most prevalent causes of rust on metal stairs, ladders, and other outdoor equipment are listed here:

Rust is one of the most common issues that pool owners endure. Rust leaves ugly marks on your swimming pool ladder or stairs. The rust not only creates issues with the look but also affects the quality of your pool ladder. It weakens the metal and reduces its lifespan.

If the rust is on the exterior of your pool ladders, then that’s fine; you don’t have to worry a lot. However, if it’s on the metal step rung or around any other part submerged in water, you need to remove the rust as soon as possible. 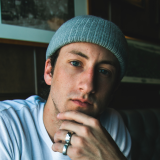 Steven Brogan is a former state-level swimmer. He loves writing and testing lifestyle products.Connect with him.